My History at Mr Shifter Removals

I first became aware of Mr Shifter Removals just around 3 years ago, The company owner Jim was visiting me in London, and whilst in the lounge he received a call from a potential customer. It was a call that he had received from one of his customers who was living around the middlesbrough area at the time and looking for a quote for removals. 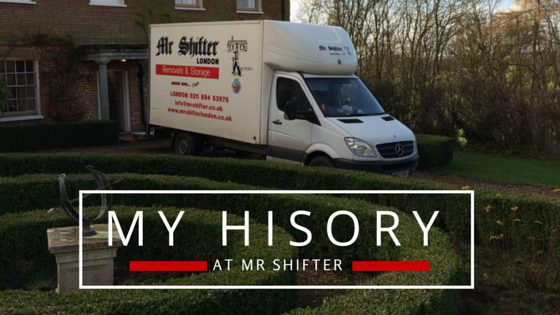 He quickly put the customer at ease and explained how the removal process worked, he also asked the customer when they might be available for him to visit to put together a free quote for them, as he preferred to do the majority of his quotes this way as he gets a better idea of what his customer is looking to move, and he can give them a fixed price for their removals.

The next time I came across Mr Shifter Removals, was a few months later, when I met Jim in his home town of Darlington, we sat down together because he was interested in expanding his company down into London, and was interested to know if I would help him do this. I was originally based in West London around the Twickenham side of town. Looking back the only real competition around my home town for removals was a small man and van operations called Barans removals that used to park their vans near my old school.

I was now living and working in East London, commuting between Stratford and Royal Arsenal, so I knew there was a lot of potential to build up a business that was starting to draw in a lot more people and work to the area, people that would need help moving house to stay settled in the area.

I was interested in taking Jim up on his offer, and we spent a couple of hours of working out the finer details of how the business works and how it would work opening a second site in London.

My first experience at Mr Shifter was even before I had even started working at the company to begin with. Jim had sent his son on ahead of a removals truck that was delivering a job into Highbury and Islington. The house had been in our customers family for many generations but he had been living in Yarm for a number of years with his wife. Before they finally decided to move back down to London.

I remember arriving at the customer’s house that morning, and seeing this massive removals truck parked outside, I was overwhelmed. And then they opened up the side doors to reveal these huge wooden crates; the customer has had their belongings in storage for a number of weeks before it was arranged to be moved down, and this meant that their goods were not mishandled or damaged whilst out of their care. We quickly started work on the first crate, and got to delivering the goods into our customer’s house. The customer had 4 of these of their truck this day and another 2 to follow the next day. It was overwhelming how much they had to move but it also struck me how appreciative they were and happy that their belongings had been handled and delivered by such a professional team.

A couple of days later I took a trip up to Middlesbrough to visit Jim again, he want to spend some time with me getting me used to what he did on a day to day basis, as his appointments and the way that he dealt with customers would be a strong contributor as to how I would go about expand his business in London.

The first customer we met was living in a 2 bedroom house around the area, Jim asked a few questions about where she was moving before we started walking around the property to identify what she needed moving. Jim also gave her his professional opinion on how best to handle her furniture and to ensure that any items that may need to be taken apart to help them be removed from the property.

After we had completed the survey, Jim started to work out roughly how much the whole move would cost, one thing he did notice is that she started to become quite frantic about the whole move and especially needing to have everything packed up and ready to go on the day, whilst looking after 2 children as well. Jim suggested that if she needed it, she could call his office a couple of days before and he could send out a couple of lads to get the property packed and ready for her to move.

Whilst I was driving around with Jim that day, I started to hear more about how Mr Shifter had started and grown over the years. He originally was working as a mechanic when the prospect of removals came up, he had a long wheel base transit that he used in his day job. But was constantly being asked by neighbours and locals if he would be able to take a few items and belongings to and from London for them. In the beginning Jim was travelling to London at least once a week to drop off and collect items for his customers. This is probably where his love for London started.

Over the years, the requests got bigger and so did his reputation, I remember one story that he told me about, a customer needing some furniture moving from a house around middlesbrough to a home in Scotland, the job was bigger than Jim’s van could handle at the time, so he used the money he would get from doing the job and went out and found an ex-ambulance van that would be just big enough to do the move for him. He didn’t make much money from doing the job itself, but he now had a second van, not to mention larger to handle bigger and better jobs.

As time went on, Jim needed to start expanding further and began recruiting a team around him, by one year, Jim had managed to put together enough money to buy a 7.5 tonne truck which would be a suitable truck to move most small houses. In the height of one summer removals season, Jim and his small team were doing 4-5 home moves a day! Because of the economy at the time Jim didn’t want to miss out on any potential work as it may not always be there come the winter.

Jim’s company, Mr Shifter Removals has been going many, many winters now and has gone from strength to strength. He started it over 35 years ago, and within a few short years he was even moving into his own warehouse, that he has called home for the last 22 years. In the winter of last year, Jim was given the opportunity to expand his warehouse further and increase his business in the North East, he now occupies a 20,000 square foot warehouse in the heart of Middlesbrough.

As well as the 6,000 square foot warehouse in Barking, one of the hubs of East London, that I am currently running for him. We have been running in London now for almost 3 years, and after a year and half were ready to take on our own warehouse as well. Back when we first started, it was me and Jim’s son that used to run around in a medium sized van helping customers move around town and further afield. We now have use of a 18 Tonne furniture truck, 2 medium sized vans, an office administrator and a crew of 10 in London, as well as regular access to the many vehicles and crew that work for Jim’s fleet in Middlesbrough!